Brandon worked his way up the ranks in the Sales department at a pharmaceutical company that was deemed one of the fastest growing companies, by Forbes.

He knew how difficult it was to get appointments with medical practitioners, to organise visits efficiently etc often having to go back and forth between an area and another just because he couldn’t organise his appointments geographically.

There was the constant note-making and losing of those notes, while later, the worries about whether representatives were indeed putting in the hours that they were supposed to be dedicating because of how much effort was required, now that the workload had drastically increased along with competition too.

He noticed those same difficulties being faced by his workforce and the slump in workforce satisfaction because of the increased effort required.

Thus, when he decided to give ReachOut Execute a shot, he instantly saw how it was so much more beneficial to the way work had to be done when compared to how he had to go about it.

His field representatives could now schedule appointments in geographical order so that they could effectively finish all the visits at a particular location before moving to the next, saving time and resources. They could get reminders and notifications, if they were running late for a meeting or a scheduled appointment. They now had access to all the information that they needed, at their fingertips through the mobile app, including information about the products: consumables as well as others, that they had to familiarise medical professionals with.

Specific tasks could now be assigned to specific agents based on their geographical location, their workload or their performance. Knowing who exactly was getting work done better allowed for employees to be rewarded better too.

He found that his workforce was performing better, as well as feeling better as the workload decreased while productivity increased thanks to the efficiency with which field representatives were doing their work with the tools provided.

The representatives got a hang of how to get things done, almost instantly thanks to the intuitive interface in the mobile app. Simple and subtle things such as integrated navigational directions from Google as well as speech-to-text capabilities made their jobs easier for them too.

Brandon saw the landscape and the way things functioned change as they stepped into a new era of working more efficiently and smartly. 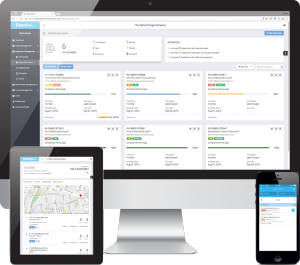 Do you still use paper or Excel spreadsheets to manage your service business? ReachOut is a web and mobile solution for companies to schedule, dispatch and deliver inspections, work orders, ticketing and more.

Want to know how you can improve your operational efficiency and bottom line using our work order and inspection software? Contact us to set up a free no-obligation demo.

© 2020 ReachOutSuite. All rights reserved, Designed and Programmed by Fingent.